Spectral Edge technology enables the dynamic fusion of RGB and NIR light in real-time, operating at pixel-level without introducing artefacts even at the lowest lux levels. The technology is embeddable within existing software or silicon

The advantages of this technology include providing heightened image detail in very low light and mixed lighting conditions. Essentially, in low light conditions it is the unique and intelligent fusing of NIR with RGB lighting that enhances surveillance images very significantly – making more accurate facial recognition possible even in the most challenging of lighting conditions.

Spectral Edge’s Fusion technology had already found applications in sensors within cars, smartphone cameras and video conferencing systems and is proactively looking to break into the professional security market through a combination of partnerships with chip manufacturers serving major camera manufacturers and via direct approaches to high-end camera manufacturers.

Following an initial consultation, Agility PR identified the key opportunity for Spectral Edge in the professional security market was to focus on partnering with leading camera vendors as well as chip manufacturers.

The PR campaign was geared around Spectral Edge’s commitment to exhibit at ISC West in Las Vegas in April 2019. Agility PR promoted an official product launch to US trade media and key industry analysts at the event with the aim of securing meetings with relevant US-based vendors, OEMs and silicon manufacturers.

Media and analyst outreach pre-event led to arranging a full briefing with Jon Honovich at IPVM who favourably reviewed the technology just before ISC West. In addition, this work was overlaid with an ISC West Preview Press Release for both UK and US media distribution.

Spectral Edge received widespread interest at ISC West both from potential partners and technical trade press, with editorial coverage obtained in both UK and US trade media. Successful implementation of the PR campaign led to a re-focus of their product development direction in the short term as they secured interest from a FPGA chip manufacturer supplying machine vision systems providers. Spectral Edge is now planning a second PR campaign in the professional security market to kick off in the Autumn.

“Agility PR’s expertise and contact-base inside the surveillance market is second to none. Miles was able to help us articulate our technical differentiation for the professional security market through a strong Technical White Paper.
The agency’s outreach work on both sides of the Atlantic opened up meetings with some very influential analysts including John Honovich at IPVM and Josh Woodhouse at IHS Markit as well as key UK and US trade journalists. I would have no hesitation in recommending Agility PR to any organization looking to build their presence rapidly in the professional security market.” 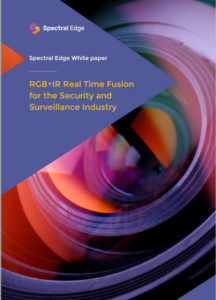